The link to earning Buffalo State credit for conference credit is below:
http://igpe.buffalostate.edu/conference-credit 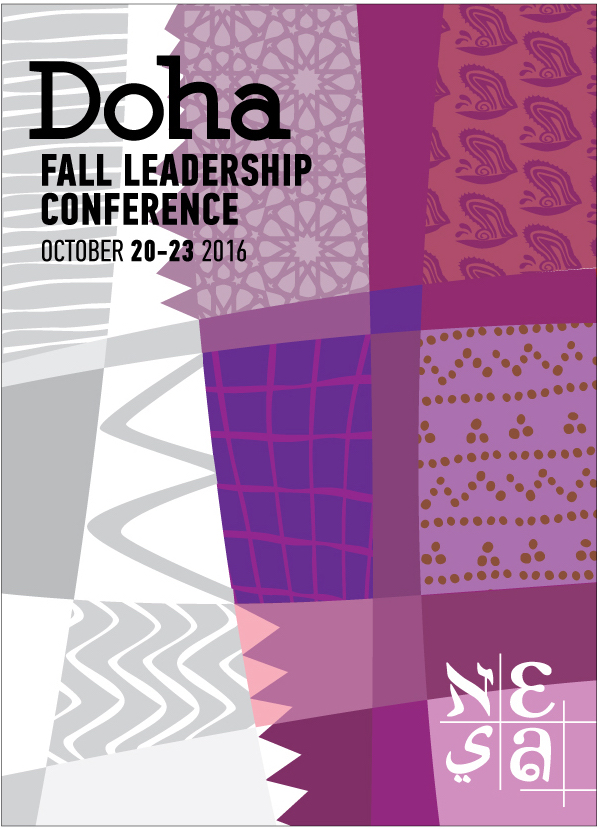 NESA leaders gathered in Doha, Qatar, for the first time ever for their annual Fall Leadership Conference (FLC). Held at the elegant Ritz Carlton Hotel, this FLC was especially momentous as it was David Chojnacki’s last fall conference as NESA Executive Director before stepping down in July, 2017. The organization took the occasion to honor David’s contributions and his legacy, as well as to celebrate his and the organization’s journey during his twenty-one-year stewardship. More than 525 delegates attended this historic event, for high-quality professional learning and reflection on NESA’s impact on schools in the region and beyond.

Thursday’s plenary opened with a moving choral performance in Arabic by the High School Treble Choir of the American School of Doha, followed by welcome remarks from NESA’s David Chojnacki, NESA Board President Rose Puffer (ISOI-Islamabad), Qatar Foundation Schools Executive Director Peter Corcoran, and American School of Doha Director Tom Hawkins who introduced US Ambassador to Qatar, Dana Shell Smith. The Ambassador thanked NESA educators, stating, “All NESA schools collectively form an exceptional organization that embodies collaboration and educational excellence… The schools you all run are truly the indispensable backbone of our wider communities… In each place I’ve served, I see families from throughout the region and beyond choosing NESA schools to educate and cultivate tomorrow’s leaders.”

In his opening keynote, Ron Ritchhart from Harvard’s Project Zero spoke on “Creating Cultures of Thinking: The 8 Forces We Must Master to Truly Transform Our Schools”, describing school culture as the foundation that determines the intellectual life of the school. His keynote was followed by an extended session in which school teams were invited to explore, assess, shape and plan to improve their school cultures.

During their Saturday morning keynote, “From Effectiveness to Faithfulness: The Quest for Institutional Integrity”, Tara Reynolds and David Henderson from the Center for Courage and Renewal explored how educating the whole child means “student success” is more than academic achievement, and that we help students to well-being by bringing critical thinking to their story and critical love for the embrace of their identity. They called on leaders to “be faithful to an institutional calling of integrity and wholeness” that embraces compassion, authenticity and love.

Before the FLC, several preconferences were offered for new trustees, principals and on U-Theory. During the four conference days, delegates took advantage of in-depth training at 17 three-hour ‘specialist’ workshops, including a session by NESA member International Schools Group-Dhahran (on scheduling for collaboration) and one co-presented by AIS-Chennai admins (and specialist Michael Nachbar) on professional learning in the digital age. Joellen Killion facilitated a session where NESA members AIS-Riyadh, The American School of Bombay and The KAUST School presented their professional growth models (See article in the Winter 2017 NESA NEWS, p. 13). Additionally, extended institutes took place for board trustees, business managers, and human resource professionals. Finally, NESA members and affiliates presented 26 one-hour General Interest Workshops to their peers.

A new feature of the FLC was the amazing work of ‘live action graphic recorder’ Taryl Hansen, who visually ‘captured’ the main ideas of the three plenary sessions and Dr Killion’s three-school workshop. See close-ups of Taryl’s visual representations of conference sessions on the FLC gallery.

Sunday afternoon’s closing plenary -- “NESA: Celebrating the Journey” -- marked the beginning of NESA’s transition as David Chojnacki steps down next July, after 20 years as Executive Director, and turns over the leadership role to Madeleine Hewitt, now at The KAUST School in Saudi Arabia. This session was a chance for all of us to reflect on and celebrate David and NESA, and featured videos and live presentations of NESA friends past and present. (See article in the Winter 2017 NESA NEWS, p. 6)

NESA fosters a balance of professional and personal development, so delegates got a chance to connect at Thursday's Welcome Reception in the Ritz Carlton’s Fountain Courtyard with lively music from “Doha Jazz Fusion”, who also played at Saturday evening’s Gala in the Ritz’s Al Wosail Ballroom. The Gala evening was held in honor of David Chojnacki to celebrate his legacy and contributions to NESA as well as to international education.

At the Gala, David presented the Finis Engleman Award to former NESA Board President Kevin Schafer (TAISM-Muscat), who then bestowed the same award on David. (It was a surprise to both! (See the Winter 2017 NESA NEWS, p. 8 & 10.) NESA’s Professional Development Advisory Committee (PDAC) recited a poem they wrote based on the “Davidisms” they had collected over the years. Each delegate received a packet of coasters of the PDAC’s favorite Davidisms illustrated by Taryl Hansen. NESA Board member Brian Matthews (AISR-Riyadh) then gave a tribute to David on behalf of the Board with an ancient Greek ‘symposium’ theme. Finally, the NESA Staff escorted David to the stage where they presented him with a memory book of messages and tributes from the entire NESA community.

Next year’s Fall Leadership Conference is October 19-22 at the InterContinental Hotel in Abu Dhabi, UAE. Mark your calendars!

Check out the FLC 2016 photo galleries and videos shown at the closing plenary at: www.nesacenter.org/events/galleries.