All rates are in Baht, inclusive of service and taxes and buffet breakfast.

-Maximum Room Occupancy: 3 adults OR 2 adults and 2 children under 12yrs
-For additional persons in a room when the extra bed is not requested, the charge for breakfast is as follows:
Children 0-5: Complimentary
Children 6-12: Baht 450*
Children 13 and above & adults: Baht 900

There are just two steps to finding yours and printing it:

All certificates are created using the names given during the online registration process. If there is a misspelling in your certificate, please contact Maria Boutzarelou. 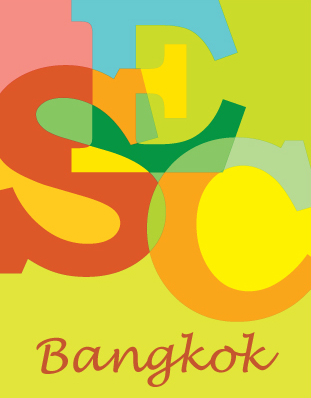 A record-breaking 700+ educators from schools throughout the NESA region (and beyond!) gathered April 5-8 in the “Land of Smiles” — Bangkok, Thailand. They attended four keynotes, three half-day specialist sessions, and four teacher-produced workshops (from a choice of 45!).

The four keynotes included the following distinguished speakers: Lucy Calkins (sponsored by International Schools Services) of Columbia University’s Teachers College Reading and Writing Project talked about how the Common Core State Standards represent “new horizons” all NESA schools can walk towards, in “Walking Courageously Forward in Today’s Common Core World: Literacy Instruction, School Reform and Visions of Tomorrow”; child/family psychologist and author Michael Thompson (sponsored by Buffalo State-SUNY) explained how to deal with the dynamics of childhood social relationships, including bullying, in “Best Friends/Worst Enemies”; Scott McLeod of the University of Kentucky described how children and adolescents are using technology to make positive changes in their communities in “Powerful Technologies/Powerful Students”; and Kyung-hee Kim of The College of William and Mary spoke on how to foster creativity in “Gardening the Creative CAT: Creative Climate, Creative Attitude and Creating Thinking”.

Delegates chose from a wide range of four-hour "specialist” workshops on topics ranging from iPads in the Classroom, the emotional lives of boys, neurolinguistics for teachers, and es/ms mathematics, to assessment and world languages, writing in the MS and HS, counseling vulnerable adolescents and technology for educators.

NESA conferences are a balance between the professional and the personal. Friday evening delegates socialized at the Welcome Reception – sponsored by The College Board - on the Sheraton’s Sambal Terrace overlooking the Chao Praya River; and at the Gala Dinner Sunday evening – sponsored by TieCare International – where they enjoyed a fabulous buffet and a traditional Thai music, dance and puppet performance.