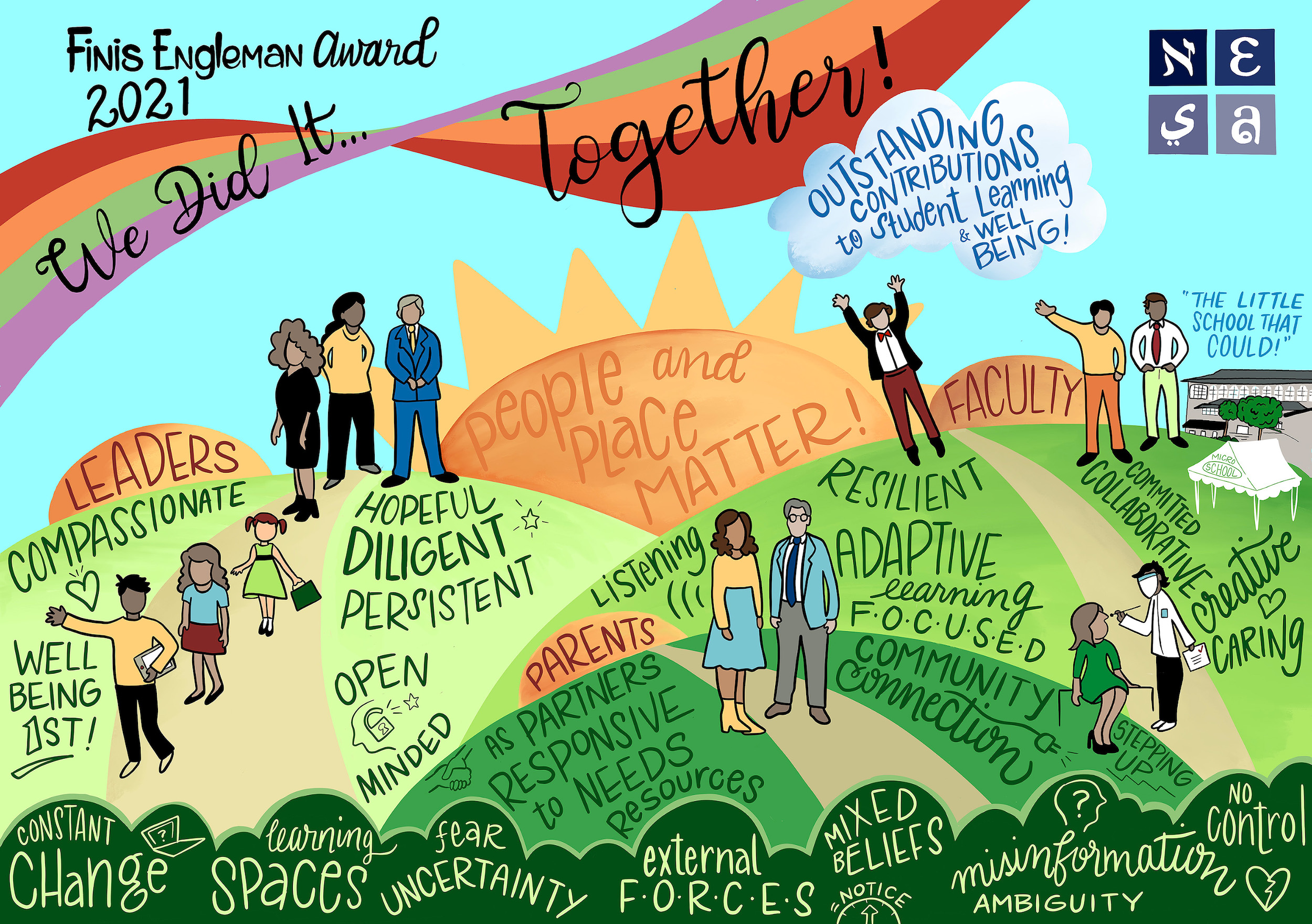 The 2021 Finis Engleman Award, NESA’s highest honor, was announced at NESA’s recent Online Leadership Event (October 21-22). The award was presented to all Learning Leaders across the NESA Region.

To mark the occasion, NESA commissioned graphic artist Taryl Hansen to create the tableau above with the rainbow message, WE DID IT TOGETHER. It highlights the incredible compassion, resilience, and determination involved in meeting the challenges NESA educators faced last year.

NESA Board President Rose Puffer, Superintendent of the International School of Islamabad, made the following presentation at #OLE21:

For decades NESA’s Vision has been:

That vision took on special meaning in 2020-2021 —- a year in which ‘barriers and boundaries’ impacted our world like never before.

At our Winter Board Meeting in February, 2021, our NESA Trustees discussed the Finis Engleman Award, the highest award we present for Outstanding Leadership from a regional leader.

Dr. Finis Engleman was a man whose memory will always be cherished. He was an educator of international stature and a major contributor to NESA. In recognition of his unparalleled service to international education, the NESA Board of Trustees has always given its Finis Engleman Award to an educator whose outstanding dedication and service to schools in the NESA region has resulted in significant, long-term contribution.

On behalf of the NESA Board of Trustees, this year I am proud to announce that we award our highest honor, not to any one individual, but to all the Leaders of Learners Across the NESA Region.

In light of the collective efforts and achievements of all, this year the honor goes to each Member School and its Community, celebrating Leaders, Educators and Parents for providing heroic support during unprecedented challenges.

WE DID IT TOGETHER!

Take a moment to explore the landscape in the tableau. Which message or phrase most resonates with you as a Learning Leader who persevered last year?

Congratulations to the entire NESA Community!

All NESA Members and Affiliates received electronic copies of the tableau in several sizes to print and post.